What is the first thing that comes to mind when you hear haute couture? Extravagant ball gowns, intricate embroidery, and an abundance of luxurious textiles used to make the audience to admiringly follow every move of the graceful models but in the ever-evolving world, this approach does not cut it anymore. For the consumer of today, couture is an authoritarian and a supreme way to make a statement in the world of fashion and art, making the audience reflect in addition to simply appreciate. 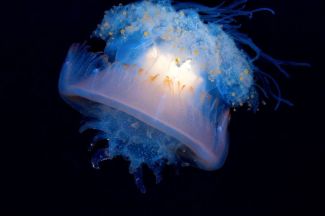 “Because human stories always change everything”, said Pierpaolo Piccioli, the creative director of Valentino. The Spring/Summer haute couture collection of 2018 immediately stirred a discussion among the fashion enthusiasts and not only, starting with the invitations. The following featured handwritten notes with a huge V inside, shaped from 72 signatures of the petit mains that stood behind the iconic looks. In fact, the designer named each look in honor of its creator, thus giving the ultimate credit and celebrating the hard working highly skilled professionals that rarely get recognition.

And so the show begins. It takes more than courage and nonchalance to put, as an opening look, an outfit that consists of a puffy tapering yellow coat with manly fitting brown pants and a semi-transparent white tank with diagonal stripes. Perhaps the loudest and the most memorable feature of the ensemble was the jellyfish-inspired aquamarine ostrich feather hat. However, signor Piccioli did not stop there and disregarded the unspoken rule of sticking to a particular color palette. Sun yellow, tropical teal, royal violet, classic red, refined coral and other bright shades contrasted perfectly with soft neutrals. Feathers skimming the floor, oversized headpieces, large ruffles, girly scallops, massive flower prints, sheer and sparkling textures, defined waistline, the lightness of tulle fabrics: this fashion vinaigrette seems to have earned the fashion house a Michelin star. The collection celebrated diversity not only of the clothes that enter in the definition of haute couture but also of the individuals that work together to create something extraordinary. 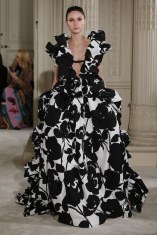 It would not have been correct not to mention that the house was put under heavy criticism after collaborating on its last campaign with a fashion photographer, Terry Richardson, which has been accused of sexual harassment. Instead of making a public statement the designer let the collection talk for the brand and show what are the true values that maison Valentino stands for and believes in. 68 looks, 68 voices, 68 recognitions: there is nothing else to add but to say that this stunning show was worth a thousand words and more.